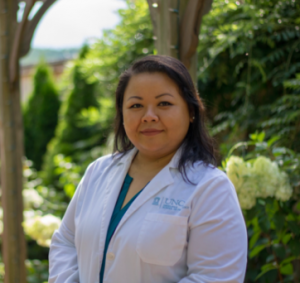 Lee Arphai is a current PY3 (c/o 2021) from our Asheville campus. Lee completed her undergraduate studies at UNC-Chapel Hill where she received her B.S. in biology. Prior to pharmacy school, Lee worked with child psychiatry for 8 years at UNC hospital. She also has had the opportunity to travel to many countries (she’s already been able to travel to 6 of the 7 continents!). If you happen to have wanderlust, she may be the person to ask for advice! For today’s student spotlight feature, Sit with Senate’s Megan Tran interviewed Lee.

Sit with Senate: How have you evolved as a student since starting pharmacy school?
Lee Arphai: “Well, I know a lot more about drugs, that’s for sure. I’ve seen myself becoming more confident in my abilities and giving recommendations more assertively. I remember being so scared to take someone’s blood pressure, check a blood glucose, or give an immunization. Now, it’s like ‘sure, I can do that for you.” I hope to practice at the level of some of my awesome preceptors and professors one day. Just knowing that someone’s health depends on the work I do motivates me to be the best future pharmacists I can be.”

SwS: What is your most memorable moment at the UNC Eshelman School of Pharmacy?
LA: “My most memorable moment at ESOP was during the Well-Being & Resiliency Gala in Asheville this past May. The gala was the last big fundraiser we planned for an endowment in memory of a friend and fellow ESOP student who passed away. The planning took months and involved a lot of meetings, but it was all worth it to see how everything came together that night. The generosity and support from students, staff, faculty, and community members were awe-inspiring. With money raised from the gala, we were able to surpass our goal for the endowment. I’m still pinching myself.”

Lee shares that endowment process typically takes a longer time to come to fruition, but with the passion and belief from everyone involved, they were able to meet their goal in just a year! This past summer the first award was given to one of our own by The UNC Pharmacy Foundation. The endowment money gathered from multiple fundraising events throughout this past school year was completed after the first award was given. Isn’t that neat? It really takes a community and commitment to see something through to the end!

SwS: What do you like to do in your free time to relieve stress from school/work/immersion?
LA: “I love to sing. I’m far from good at it, but that doesn’t stop me. Half the time, I don’t even realize I’m singing until someone points it out. Last year, our house got a karaoke system, which was one of the best things we have done. We’ve had so many great memories singing off-key together and pretending to be the Backstreet Boys. I love singing so much that I even co-founded a choral group on the Asheville campus called the FluoroquinoTones. When I’m not singing, I also like eating out with friends, shopping, and walking around aimlessly.”

SwS: Can you list three things that you’re passionate about? 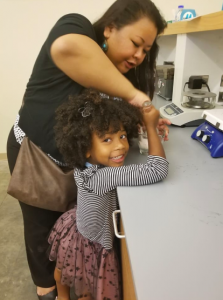 LA: “Just 3? For one, I’m passionate about helping others. My parents came to the U.S. as refugees and we didn’t have a lot of luxuries. Growing up, there was always a church around the corner helping out my family. I wouldn’t be where I am today without the kindness of others, and I have a strong desire to pay it forward whenever I can. I’m also passionate about SNPhA. SNPhA’s core values of serving the underserved, promoting health education/access, and eliminating health disparities aligns with my own personal and professional goals as a future pharmacist. SNPhA tries to have a good balance of both service and clinical events that are meaningful to its members. I attended my second SNPhA conference back in July, and I was excited about learning new things, networking with people, and having some overall fun. I even signed up to do a rap battle there. Lastly, I’m passionate about vaccines. It’s an easy way to build your immunity against certain diseases. People also forget that getting immunized helps to protect those who may not be able to receive a vaccine. Get vaccinated!”

SwS: If you could be any medicine in the world, what med would you be and why?
LA: “I’d have to pick naloxone. It’s a superhero right now in the opioid crisis. It’s safe, effective, saves lives and more people should know about it.”

SwS: Describe your life using film titles
LA: “Based on titles alone, I would say the following film titles describe my life: Pursuit of Happyness; Rush Hour; Get Smart; The Sound of Music;La La Land; Old School; and The Lucky One.”

Of all the movies listed here, Pursuit of Happyness would be Lee’s favorite movie. She gives insight as to why this is so. As mentioned before, one of her passions is service to others. This movie encompasses this core value. Lee is fond of this movie because it’s essentially about taking on life’s challenges, never giving up, and giving people a chance. She states that when she gets the chance to make someone happy, it makes her feel good at the end of the day.

SwS: What’s the best advice you have received?
LA: “I remember one day, I was kind of complaining about the laundry list of things I had to do by the end of the week. The Asheville Executive Committee (AEC) president overheard my conversation and said something along the lines of ‘Try to think of it not as what you have to do, but what you get to do.’ He reminded me that we are privileged to be in a position to do things and that I had opportunities I had to make a real impact through positive change. It changed my perspective.”

Upon wrapping up our interview, I was so grateful that Lee was able to share her story with Sit with Senate. It was truly an amazing opportunity to see how a small shift in her mindset could make such a difference! On behalf of Sit with Senate, we thank you for your time and a great story!